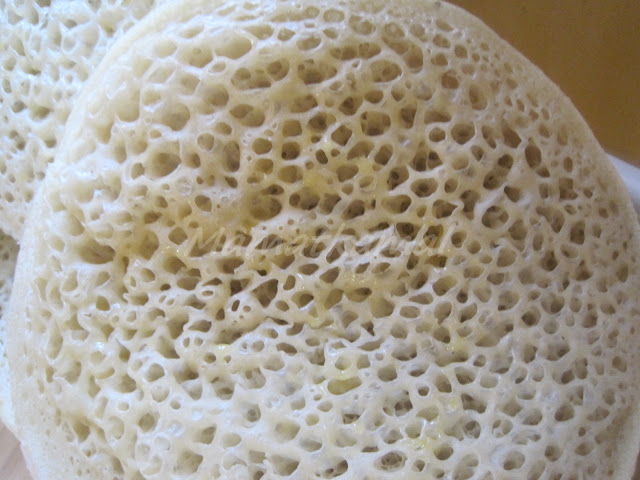 Baghrir is one of the most well known of Moroccan crepes, originally hailing from the South of Morocco, known as Souss Region, and it is a Tamazight/Shalha name, which means "Too soft".  If you call someone, especially a man "Zayd Aya Baghrir", this phrase could be seen as insulting, thus insinuating; "He (the Man) is too submissive, too obedient, too weak, etc.."!

These baghrirs are eaten throughout Morocco, especially during Ramadan for breaking the fast, but they are such a great treat anytime!  Traditionally, they are served with a sauce of butter-honey, but can also be served plain, with jam, peanut butter or chocolate spread, or Amlou Paste etc....They are readily available in small and large sizes, and can be purchased in most local Souks or big supermarkets.  However, there is nothing like a hot, homemade baghrir drizzled with a mixture of butter and honey, making you feel cosy and keeping you happy.  Baghrir is so easy to make, and to be honest, you don't even need a recipe to go for it.  In fact, if you can make pancake or pudla or crumpet or crepe, you can definitely make baghrir.  Everyone can make baghrir, the only thing you need is a honest and clear recipe with cooking tips, then you will learn quickly how to master the making of such a delicious treat!

Baghrir is usually made out of hard unbleached flour all purpose or fine semolina, known in French as "Farine de blé dur non blanchi ou semoule très fine", or sometimes, a combination of other types of flour such as; rice flour, or white flour, or corn flour, which are also used on occasion to achieve a certain texture or taste, though these baghrirs are less popular.

These little holes that you can see in the top of baghrir are the results of adding baking soda or baking powder to the yeast and thanks to them, thus, allowing baghrir to soak up anything you choose to spread on them, and perfect for holding the butter you will surely want to melt on them.  However, my grandmother as well as my mother, never added "baking soda" or "baking powder" to their baghrir batter, and their crepes still ended up with these little, cute and delicious holes on top!  What was their secret? Unfortunately, no one in my family can tell!

When I was young, I remember how my sisters and  I were so excited watching my mother and grand-mother, while they were cooking these delicious baghrirs.  We all waited watching what they were doing, counting those little bubbles once they started to pop up all across the surface.  When it’s cooked, we ate it all!

I usually make baghrir for breakfast on Saturdays, it is our delight of the weekend.  It has that light unique, soft, spongy, tender texture with an attractive honeycomb appearance and is cooked only on ONE (1) side.  Though best straight out of the pan, they can be made ahead of time and heated up in a hot pan.  Don't use an oven or toaster to heat them up, because they will turn out too crispy.  Microwaving will just make them soggy, so it is not recommended.

I'm sending this recipe of Baghrir over to Susan's Yeastspotting, at Wild Yeast 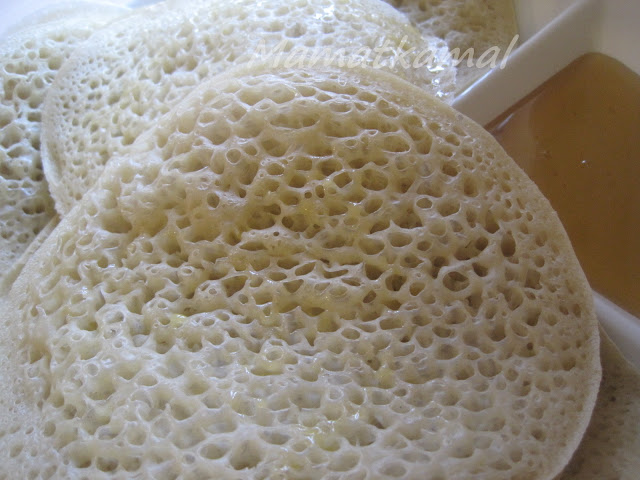 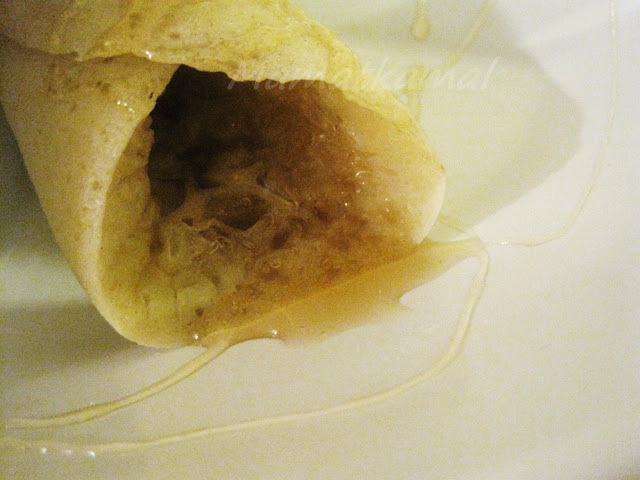 1- Set aside a pan that you use ONLY for baghrir. /  Réserver une poêle uniquement pour baghrir.

2-Use a pan the diameter of the baghrir you wish to make.  Instead of worrying each time to make a perfect circle. / Utiliser une poêle qui convient la taille du baghrir que vous aimeriez faire, c'est plus pratique.

5-While you are cooking baghrir, after each one you cooked, you should put the pan on a dampen hand towel, to allow the pan to cool a little bit (about 1 minute).  /  Entre la cuisson de chaque Baghrir, posez la poêle sur un torchon humide pour laisser la poêle refroidir un peu (environ 1 minute). 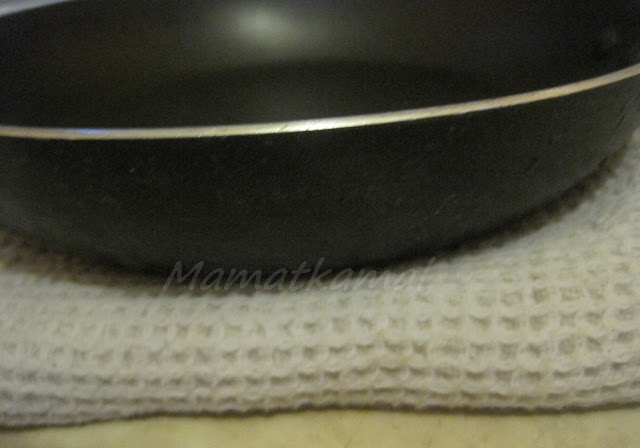 7-Check the consistancy of the batter. It is very important, if it's too thick, the bubbles will not form.  /  Vérifiez la texture de la pâte, si elle est trop épaisse, ceci empêchera la formation des bulbes. 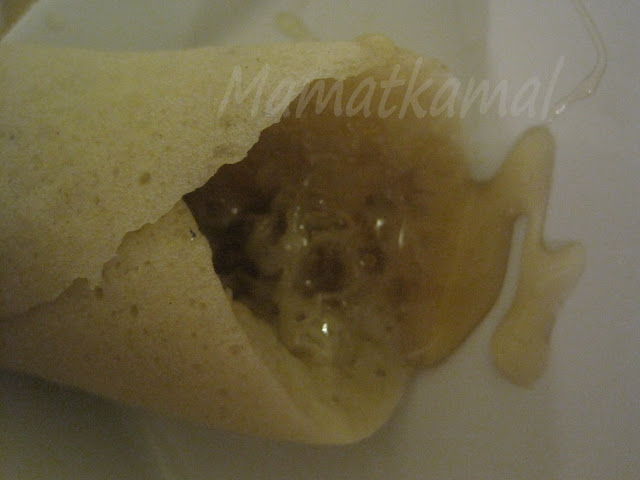 This is Baghrir served with Amlo and honey! 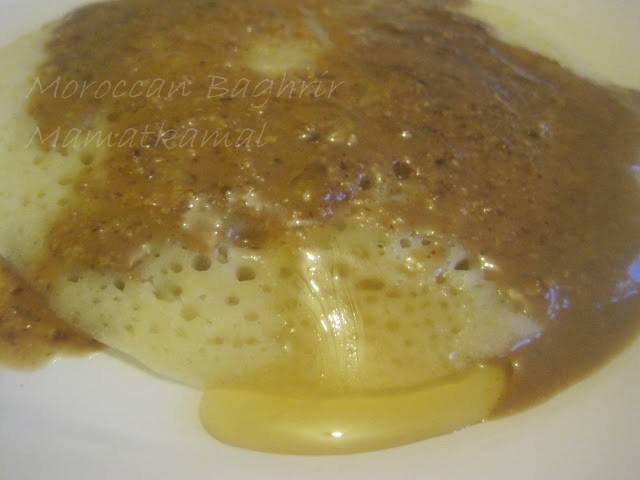 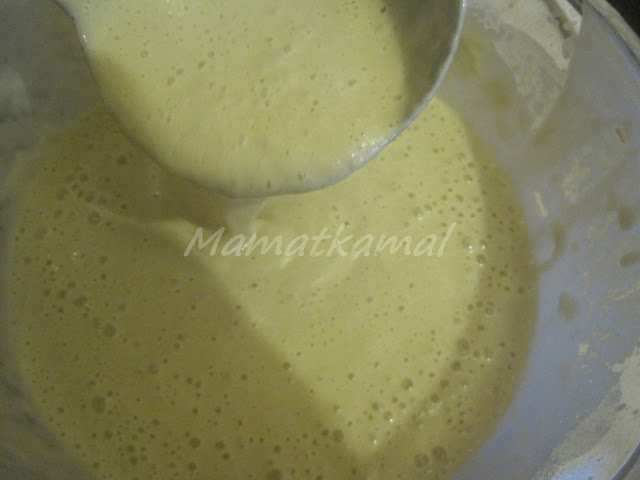 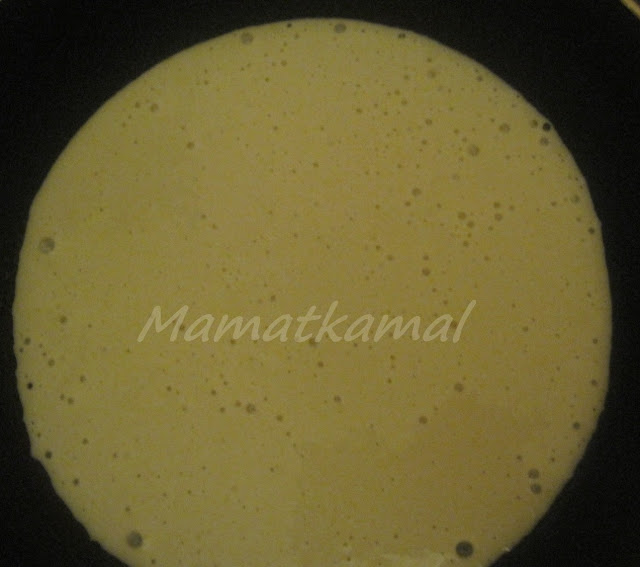 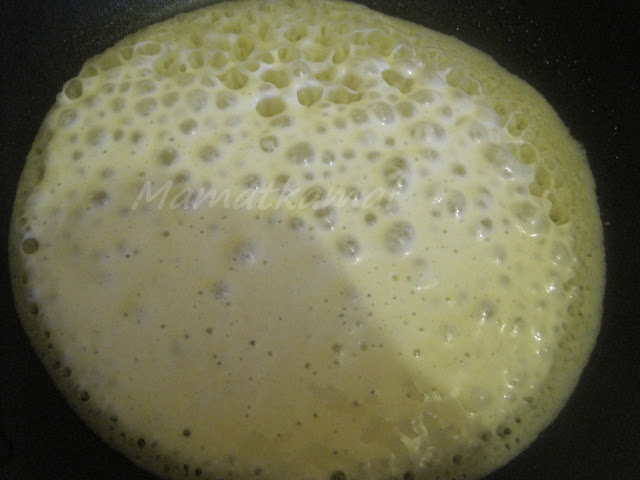 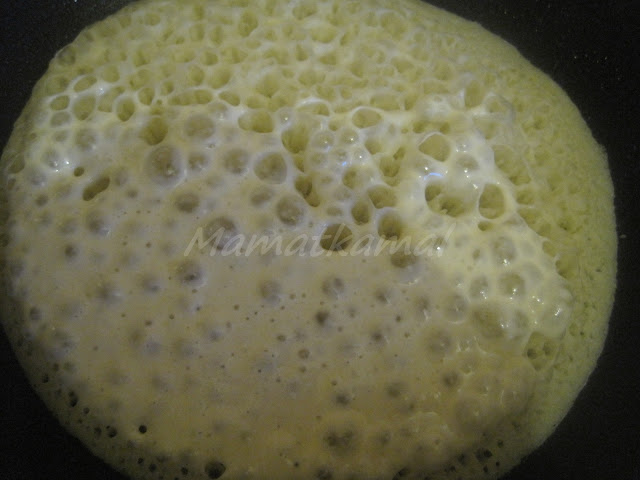 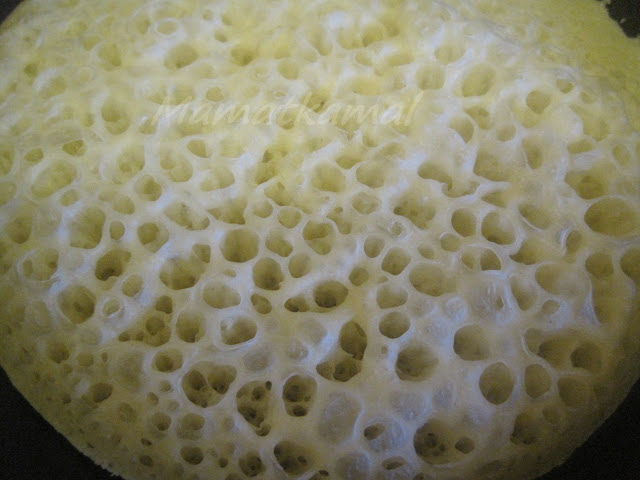 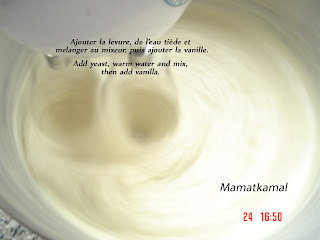 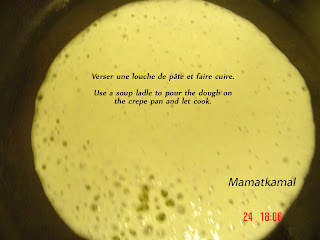 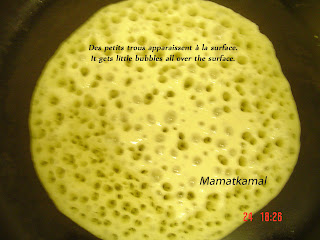 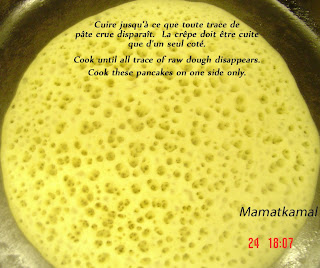 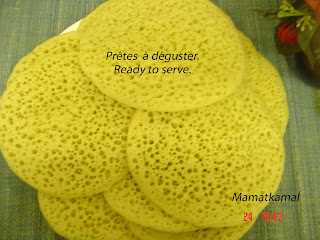 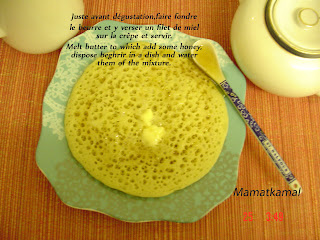 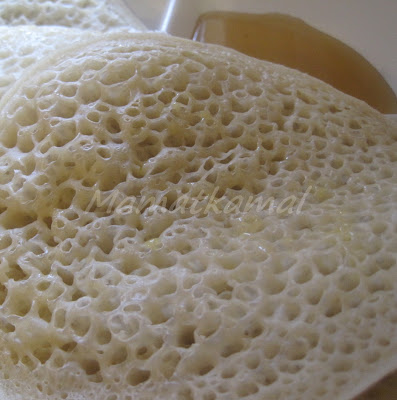 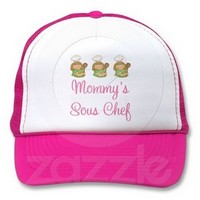 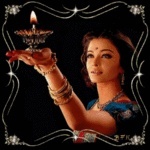 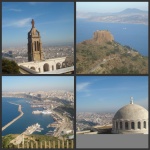 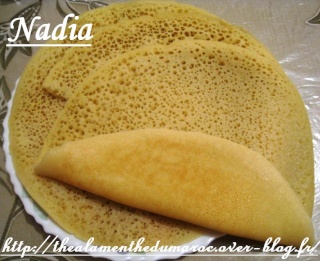 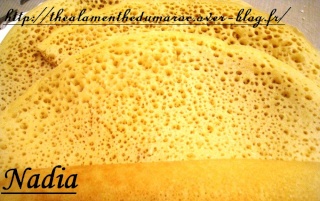